Three ways to take advantage of the slump in the sharemarket

As if you didn't know, the ASX and its big brother on Wall Street both got a case of the serious jitters over the past couple of weeks.

It seems you can have too much of a good thing, with positive news on employment, wages and inflation all conspiring to deliver a dose of reality to a complacent market.

All of a sudden, the prospect of higher US interest rates became very, very real. The market should have been expecting it, of course, and it was... intellectually, at least.

Emotionally? Well that's another thing altogether, and the sudden wake-up call saw some investors rediscover fear. Volatility was the result.

The great news is that the US economy is in ruddy good health. It was that prognosis that gives the US Federal Reserve (their version of our RBA) the opportunity to move away from interest rates that are still stuck at "emergency levels", almost a decade after the GFC.

So while share prices zigged and zagged, the actual economy - where sales and profits are made - is going well. And that augurs well for listed companies. 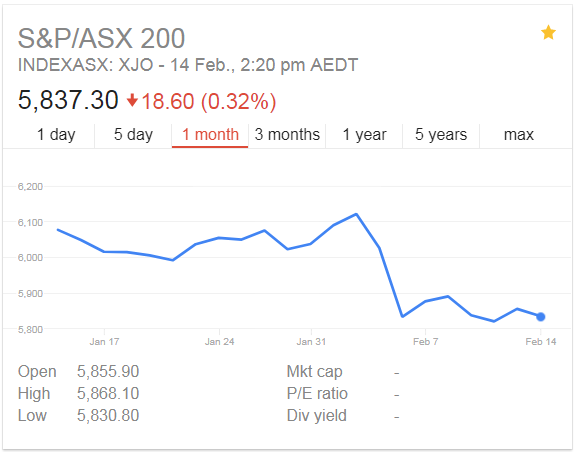 Generally speaking, lower prices - even temporarily - mean you can buy even more of the companies you like at a discount. If you liked Woolworths, CSL or CBA a couple of weeks ago, you should like them a lot more now.

(Which isn't to say you should buy just because prices have fallen. An expensive $200 pair of jeans isn't cheap just because the price falls to $190. But if a cheap $50 pair is now $40, well, feel free to grab an extra one.)

Here's a three-point plan for investors:

First, keep buying. Regular, methodical buying, every fortnight, month or quarter, is one of the best things you can do.

It removes much of the emotion, and keeps you in the market.

Second, have a look at the companies in your portfolio. How will they fare? Will higher rates slow the profit growth of the big banks? (Probably.)

What do they do to the interest bill for heavily indebted utilities, property trusts and infrastructure companies (toll roads, airports and the like)? Hint: It almost certainly won't help.

Third, make peace with volatility. It's far more normal than the recent periods of calm.

And remember, we will have many more such periods - and more than a few so-called "corrections" and "bear markets" in the years and decades ahead.

The stockmarket can be a scary place, if you're not ready for what can come. But history has shown that over the long term - despite those occasional setbacks - it has been one of the very best ways to build meaningful wealth.

Is investing for dividends still your best strategy?

By Nandita D'Souza
COVID-19 has rocked our love affair with dividends so are they still the best choice? Or is there a better alternative?

Two questions all investors should ask before buying

By Dale Gillham
Investors like to chase a bargain, but there are two questions they need to ask before jumping in.
TAGS
shares
0