Should you buy now and pay LMI or keep saving a deposit?

As rising house prices are making it more difficult to get into the property market, first-home buyers are faced with a big question.

Is it best to pay lenders mortgage insurance (LMI) and jump into the market now, or wait and save a higher deposit?

While it can be tempting to wait, purchasing a property now makes more financial sense in the long run, enabling you to reap the rewards of property growth sooner.

How long does it take to save a house deposit?

When it comes to the property market, the biggest cost could be that of delaying your decision.

The sooner you can get into the market, the better.

Often buyers believe that if they delay their decision a few years they're only missing out on a few years of growth. But it's much more than that. Generally, the longer you hold onto a property, the greater financial reward you will reap. 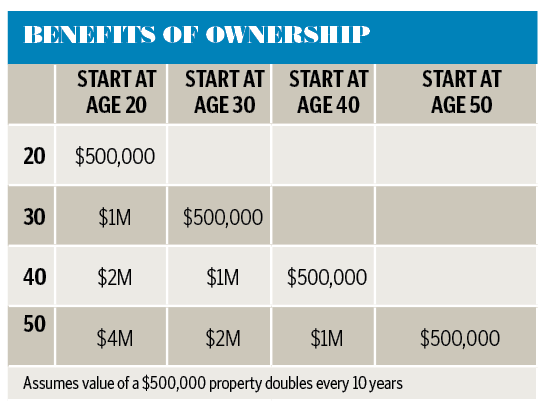 The person investing at 20 can potentially enjoy three cycles if you assume that property might double every 10 years, whereas someone starting 10 years later at 30 might only have two cycles. (See "Benefits of ownership".)

Should you pay lenders mortgage insurance?

Older generations were brought up with the thought that you have to save money to make money but younger people realise that generally you need to do the opposite - you've got to spend money to make money, and lenders mortgage insurance is the perfect example of this.

LMI is an insurance policy paid to lenders to give them security, because often you're borrowing more than 80% of the property value and considered a higher-risk mortgagee. The higher percentage you borrow and the more money you borrow the more it costs. As LMI doesn't give you any cover, most people tend to avoid it.

Alternatively, you could use LMI to buy a more expensive property that then might grow by more - it's like buying two properties rather than one. (See "Double the rewards".)

A good mortgage broker or property accountant can create an exact case for you based on your personal situation and can use different growth rates to build a range of scenarios to help determine what's right for you.

This all assumes that the market is rising, which isn't always the case.

However, I am a firm believer in buying median-priced properties close to main capital cities over the long term as they do typically continue to rise, and when other properties fall they tend to just slow down and not decrease.

So unless you're a genius and can pick all the peaks and troughs, then assume property will normally be more expensive tomorrow than it is today.

By Nicola Field
NSW motorists to save up to $750 annually, and a new calculator helps first homebuyers make a plan. Here are five things you may have missed.