Older Australians are hanging up their boots later in life, forced to remain in the workforce well into their 70s.

The participation rate for people aged 65-74 has doubled since the turn of the century, with a spike over the past two years, Deloitte Access Economics finds.

" And lower interest rates mean interest payments on their existing savings are reduced. Combined, that has forced some older Australians to work longer to support their (delayed) retirement."

Advances in technology offer another possible reason for delayed retirement.  Tech has driven the sharing economy and meant that more services can be outsourced through platforms such as Airtasker.

"These technologies provide a low barrier to entry, offer greater work flexibility, and can encourage older Australians to continue working," according to the report.

And Australia is relatively well placed to deal with the challenges posed by an ageing population.

Last month the nation ranked second in The Ageing and Automation Resilience Index compiled by Mercer and Marsh & McLennan. The index measures the resilience of 20 major economies to the threats posed by ageing.

Report co-author and Mercer senior partner Dr David Knox says that "despite Australia's high ranking, we are not immune to these risks."

"While we have the lowest percentage of tasks done by older works that can be automated, at 42%, we still have a mid to high level of risk of automation to older workers," says Knox.

"In other countries, older workers are at disproportionately higher risk than younger workers to automation. This, however, isn't the case in Australia. We have higher proportions of older workers in jobs that are less likely to be automated, such as management, healthcare and teaching."

Meanwhile, a recent report from the Centre of Excellence in Population Ageing Research (CEPAR) shows how businesses can play to the strengths of older workers.

"Evidence suggests that mature workers are negatively stereotyped and potentially excluded in organisations, as some may have the perception that older workers are less competent, more resistant to change, and have a lower ability to learn compared to younger workers," says report co-author Professor Sharon Parker.

According to the report's other co-author, Dr Daniela Andrei, "Mature age workers can bring a diverse set of work experiences, knowledge, training, skills, abilities, and perspectives, which can be especially relevant when teams are required to deal with complex tasks, or tasks that require innovative solutions." 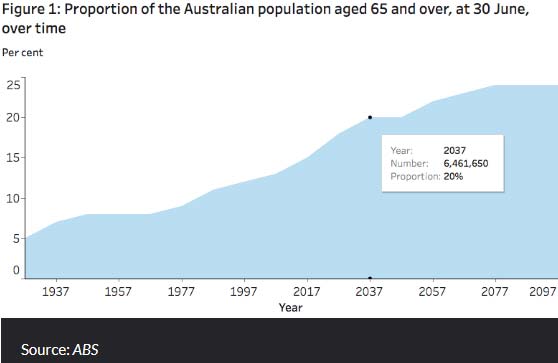 The focus on ageing workers coincides with a sweeping government review into Australia's retirement income system, following a recommendation made last year by the Productivity Commission.

The review is set to focus on the "three pillars" of retirement income, including the age pension, superannuation and voluntary savings.

By Jamie Williamson
Aussies aged 55 and over will be able to make a post-tax contribution of up to $300,000 into their super after selling the family home, if the Morrison government is re-elected.

By Tom Watson
The Reserve Bank has raised the cash rate for the first time since November 2010, with more hikes expected in the coming months.
TAGS
retirement,  interest rates,  income,  employment,  pension,  super
0